Home
Categories
Information
Please Please register or login to see the price.
Filter
Close filters
No results were found for the filter! 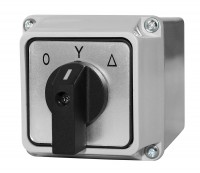 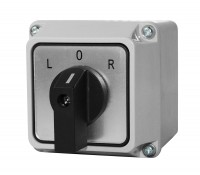 The YΔ circuit is used to start larger three-phase motors with squirrel-cage rotors with reduced power consumption. This avoids the triggering of overcurrent protection devices due to the otherwise high starting current when starting directly.
In the starting procedure, the three-phase motor is initially switched in star connection, then the motor is connected in delta connection. The power consumption of the motor when starting in a star connection is 1/3 of the power in a delta connection. The use of frequency converters has largely eliminated the YΔ switchover. In contrast to the Star delta cam switch, frequency converters can achieve a reduced current consumption with a high starting torque.

Reversing switch as a cam switch

Three-phase reversing switches are used to reverse the direction of rotation in three-phase motors. When switching over, two phases of the three-phase network are interchanged so that the motor starts in the opposite direction. Usually you switch all three phases and completely disconnect the motor from the mains in the "0" position. In the next step, the motor is switched on again with two reversed phases.
SEO= Star-delta cam switch